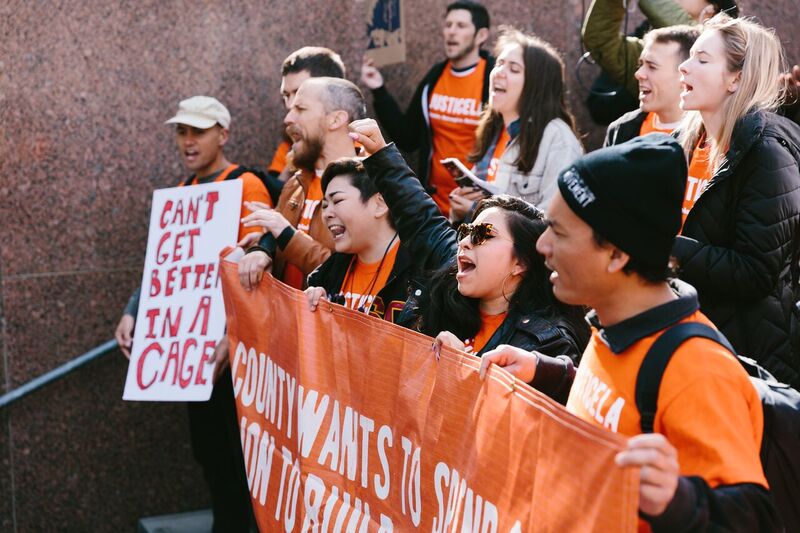 We made history. But the fight isn’t over.

Last week, Justice LA and many other organizations and community members turned out in force to actualize the vision of generations of organizing. A sea of orange shirts filled the room as a reminder to the Supervisors and to each other that people power makes the impossible possible. The women’s jail (Mira Loma) was rejected outright and the mental health jail plan (CCTF) was shifted to instead build a mental health treatment facility! Our victories are a culmination of nearly a decade of activism by advocates, community members, individuals and families impacted by incarceration. Through our collective work, we have not only stopped the jail expansion plan for LA County, we have shifted the entire paradigm away from a reliance on jails to health and human services.

But we must remain activated and vigilant.

Supervisor Kuehl argued that approving the contract for the mental health treatment facility “hardens our ability to think in other ways … this hospital would be bigger than all of our hospitals put together.” Both Solis and Kuehl stated concerns that building this mental health treatment facility will funnel resources away from efforts to expand community based treatment. We share the concerns that both Supervisors Solis and Keuhl raised during the meeting and that ultimately informed their ‘NO’ votes to Supervisor Hahn and Mark Ridley-Thomas’ amendments.

Our organizing towards stopping jail expansion and investing in LA County’s genuine community needs is not over. #JusticeLA is regrouping and strategizing our next steps. Congratulations to our coalition members and thank you to our partners and allies for standing so strong with us yesterday! We encourage everyone to stay plugged in and stay activated!