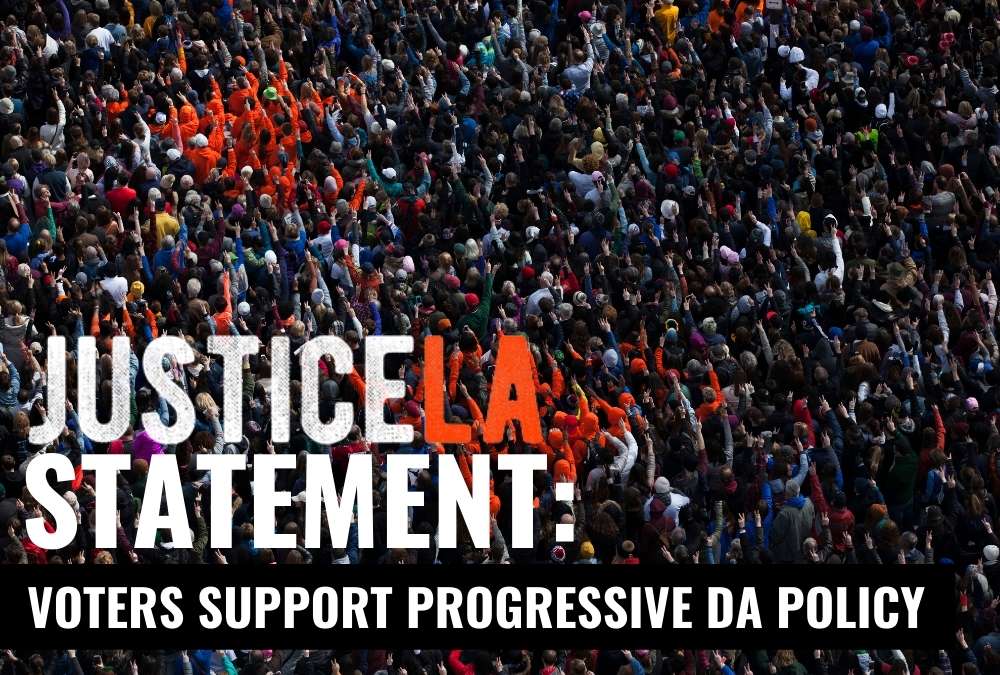 LOS ANGELES – The Association of Deputy District Attorneys (ADDA) has a hearing today about their motion for a preliminary injunction on Gascón’s directives to stop filing sentencing enhancements. It will be up to the judge today whether or not the Deputy Attorneys who disagree with Gascón have the right to ignore the directives.

Justice LA, since its founding, has successfully stopped LA County’s $3.5 billion jail expansion plan and led the development of LA County’s Alternatives to Incarceration Workgroup report, not for the sake of combatting one specific elected leader or body but to prioritize the voices of millions of Angelinos across the county. “Our coalition partners have been on the ground for decades picking up the pieces of the impact of mass incarceration, and healing our communities. This move by the DA deputies is not surprising, but ridiculous given the number of people who now believe that our justice system needs fixing. Voters overwhelmingly support a transformation of our local injustice system as highlighted by Gascón’s win,” says Anthony Robles, Community Organizer at the Youth Justice Coalition.

These actions from the ADDA are repulsive because they ignore the years-long will of the people of both California and Los Angeles County. “The Deputies Union supported Prop 20, and has continued to lie to both their members and the general public about what criminal justice reforms do. Prop 20 was defeated last year, and Prop 47 passed in 2014 because more and more people are starting to see that harsher sentences and more policing does not help our communities,” said Eunisses Hernandez, Founder & Executive Director of La Defensa.

The law enforcement and police lobby have no place in meddling with what California voters ultimately decide. While “tough-on-crime” policies were passed due to national and statewide dog whistles about Black and brown people, important shifts are happening across the state to enact needed changes to heal our communities. For decades, organizations like Justice LA have been listening to and working with families directly impacted by gun violence and mass incarceration, and have empowered these families to tell leaders how they want to see policies and practices change. The ACLU of Southern California’s Criminal Justice Director, Summer Lacey, notes that “The Association of Deputy District Attorneys is out of touch with what the people of Los Angeles truly want – change. The community voted for a justice system that works for the people, not for special interests.”

Ivette Alé, Senior Policy Lead for Dignity and Power Now, adds, “Our communities have long advocated for transformation rather than harsh punishment. The Deputy District Attorney’s Association is using scare tactics to maintain this failed system at the expense or our communities. This is unjust, and will not keep our communities safer.”

Brian Kaneda, Deputy Director of Californians United for a Responsible Budget, says, “CURB strongly supports the progressive reforms that voters demanded when they elected LA District Attorney Gascon. The “tough on crime” opposition to these new policies from judges and the ADDA is obscenely anti-democratic and defies the will of the people.