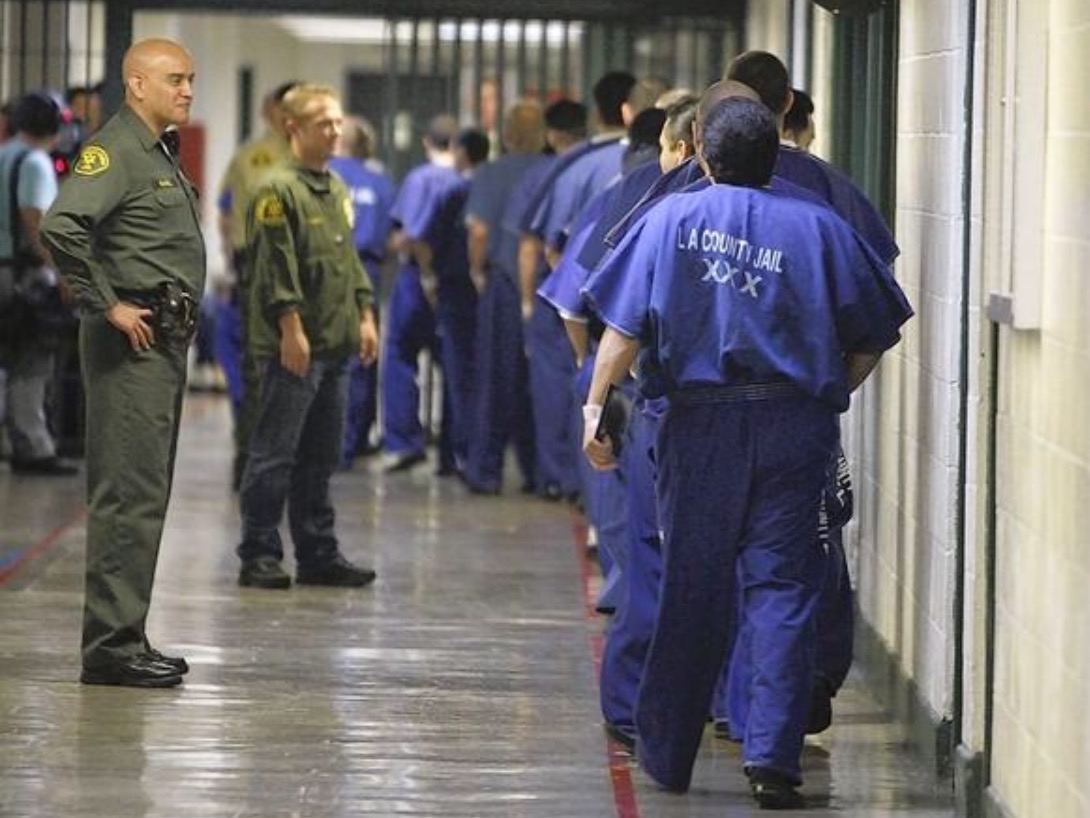 Jason David is co-founder of AWARE-LA, an all-volunteer grassroots racial justice organization of white anti-racists working to challenge racism in transformative alliance with people of color. White People 4 Black Lives is the organizing wing of AWARE-LA.

The Los Angeles County Board of Supervisors has approved a jail expansion plan that will cost an estimated $3.5 billion. That is an extraordinary amount of money to waste on the caging of human beings, especially when we can invest those resources into providing greater access to affordable housing, jobs, health care, public education, and healthy food — critical elements that serve human needs and prove not only impactful on lowering recidivism rates, but promise far greater safety for all in the long run.

People of color, especially black people, who are disproportionately targeted and devastated by our current commitment to mass incarceration, have been fighting on behalf of their own well-being and the safety of their families and communities. It is time that white people, and especially wealthy and middle-class white people, see that the fight against mass incarceration and criminal injustice is our fight as well.

As Ibram Kendi points out so poignantly in his definitive history of racist thinking in the United States, Stamped From the Beginning, dominant groups don’t actively perpetuate or passively support oppressive systems primarily because of hatred or ignorance — we do so because we believe those systems ultimately benefit us and we have internalized racist ideas that justify inequities. I can admit that my own perception has been severely distorted when it comes to crime and safety, and for too long I have internalized negative portrayals of people of color as dangerous and believed “tough on crime” policies coupled with the punishment of isolation has made me safer.

It is a tough pill to swallow when we have to analyze the ways in which we conform to the very ideas and institutions we adamantly oppose. We do, however, have an opportunity — urgent and time-sensitive — to act in solidarity with communities directly impacted by discriminatory and dehumanizing jail systems.

Los Angeles County already has the largest jail system in the world. On average, there are 17,500 prisoners in the county jail system on any given day and 80% of them are Black or Latino. This county also has the harshest bail system in the United States. Just over half of the L.A. County jail population has yet to stand trial or be sentenced for a crime, primarily due to the fact that people cannot pay for high bail amounts. Research shows that people with mental health conditions inevitably get worse in jails. The chances of developing a mental health condition for people with no previous history of mental health issues doubles once they are incarcerated.

We know that incarceration doesn’t rehabilitate and that the vast majority of people behind bars are there for non-violent drug offenses and criminalized behaviors reflective of poverty, such as not affording bail, inability to pay debts incurred via penalties and fines for infractions, and a slew of laws targeting homeless people. This is why California voters have signaled a clear shift away from incarceration and toward alternatives to sentencing, such as passing Propositions 47 (reduced penalties for some crimes), 36 (drug treatment instead of jail), and 57 (early release for non-violent offenses). Unfortunately, much of the money earmarked for diversion are funneled into the Sheriff’s Department and are not used to advance the true spirit and aim of the propositions. This highlights the need to sustain our civic engagement and build a powerful base of support after we step outside of the voting booth.

Bryan Stevenson, founder and executive director of the Equal Justice Initiative, has stated that slavery did not end, it merely evolved. He traces a line of racial terror through United States history connecting slavery, lynching, segregation and mass incarceration. Michelle Alexander, a civil rights attorney and author of The New Jim Crow, frames a powerful argument with well-researched statistics and a thorough examination of laws and political trends that posits mass incarceration as merely the revamped version of segregation — a system for disenfranchising the black community under legal auspices. Ava DuVernay’s brilliant documentary 13th builds on these arguments and traces a haunting chronology through United States history, in which slavery was never actually abolished but instead kept alive through a constitutional loophole and deceptive projects such as the War on Drugs.

This framing of the problem before us has significant implications for the role we as white people play in relationship to the presence of — and plans to expand — jail systems.

Perhaps just as significant as the actions of enslavers, lynchers, rabid segregationists, and lobbyists for the prison industry are the everyday acts of complicity and complacency by white and wealthy people who, for many reasons, think these systems are justified in some way, think these systems don’t directly affect us, or think that we cannot do something to change such an overbearing problem. It has largely been the passive acceptance and permission of white people that has allowed for violent atrocities and acts of oppression to be systemically enacted on people of color.

I recently heard Ta-Nehisi Coates, author of Between the World and Me, speak to the ways in which black people have carried the struggle for racial justice for centuries. And ultimately, Coates suggested, it will be on white people to set “a standard” for ourselves. Just as certain brave — albeit far from perfect — white abolitionists challenged the young nation’s behemoth economic engine of slavery because of its brutal inhumanity, we white people are called upon again to take action against the current manifestation of that system which we must still see as a violation of our most basic standards of human decency.

Many of us who are concerned about mass incarceration tend to feel like the problem is so massive or so far beyond our reach that we cannot do anything to change it. On the other hand, our voice is critical not just in opposing prison and jail expansion projects, but in calling for diversion programs and services that can be located in our very own communities. In fact, it is so often because we prefer to cast away those so easily maligned and quickly labeled problems or threats to the community that we throw our implicit support behind what has become a carceral state — a vast network of jails and prisons that has grown steadily despite reductions in crime and risen in priority as investment in education has dropped.

Because of these startling realities and this haunting history, I have joined a powerful new coalition looking to halt this jail expansion project and reinvest the money in community well-being. JusticeLA represents a number of grassroots organizations and grounds its work in the lives, voices, and aspirations of individuals and families directly impacted by incarceration. I will be joining them on January 11th for a town hall meeting at the Hollywood United Methodist Church at 7pm and I encourage you to join me. 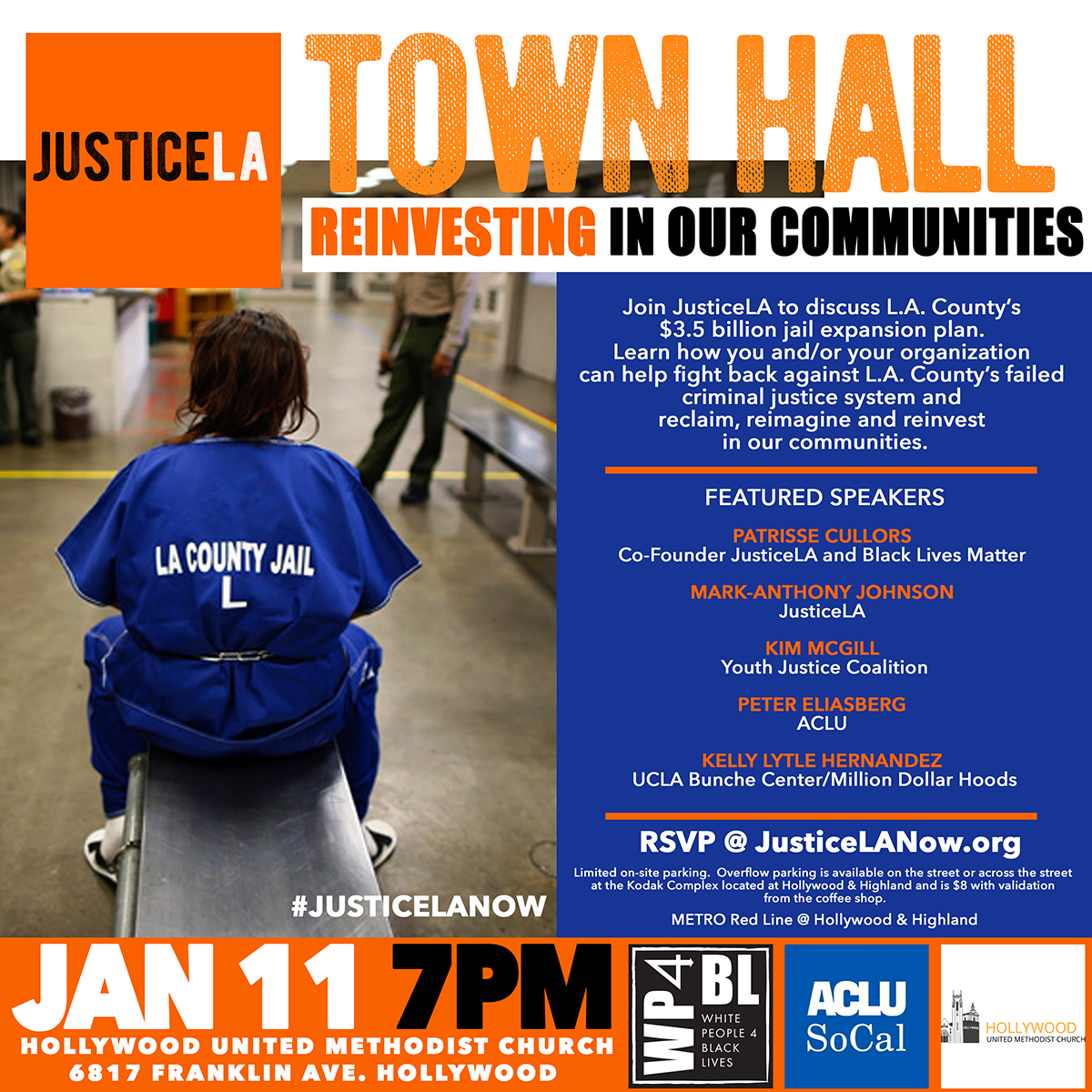