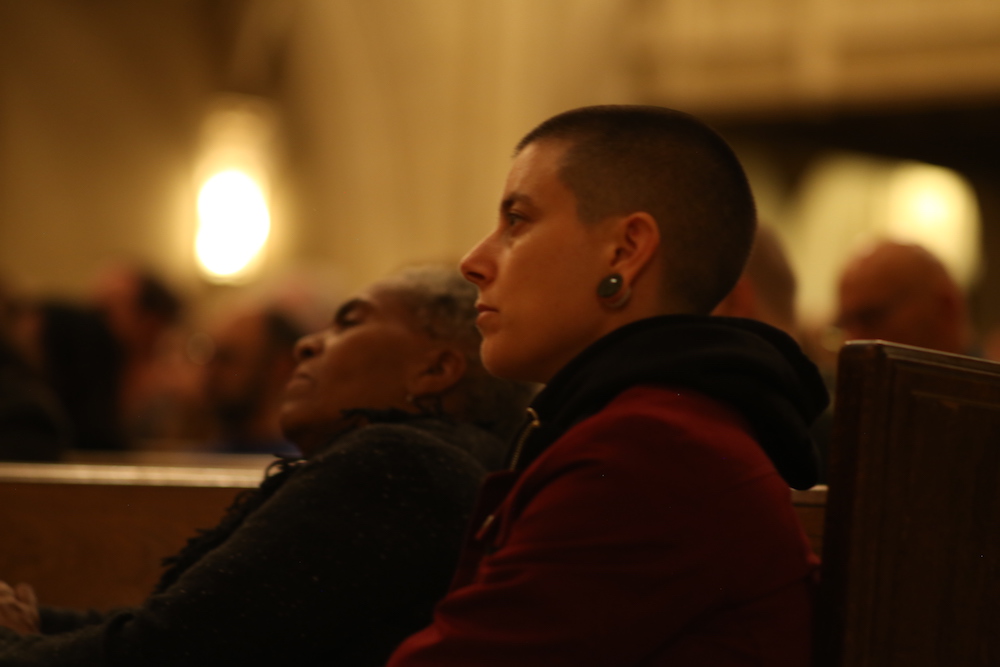 Unabridged transcript of a speech given at the Justice LA Town Hall at Hollywood United Methodist Church on January 11, 2018.

The task before us, as white people of conscience, is to mobilize other white folks into taking anti-racist action and to dismantle the white supremacist system that is crushing all of us. To be clear, we are not just talking about the brand of white supremacy touted by people who wear white hoods and the alt-right, or people who cover themselves in swastika tattoos. It is the white supremacist system that created the racial divide, and awarded white people both material and psychic benefits, causing us to distance ourselves from aligning with people of color to challenge power structures that oppress all of us. This centuries old scheme has allowed white people to support “law and order” policies that devastate poor white communities and communities of color. The law and order policies, under the guise of public safety, served to indoctrinate the vast majority of white people into a culture that supports and promotes incarceration as the tool to solve all of our social problems. What does it say of our county’s character if we value criminalizing mental health issues, poverty, and public health issues that stand to result in the need to expand jails instead of investing in the health of our community members; that building jails is a better investment than building schools; that building jails is a better investment than providing mental health care and substance abuse treatment services. Lastly, that building jails is more worthy of our tax dollars, than providing everyone with access to healthcare, affordable housing, education, and job training programs. All this to promote the illusion of public safety. But who defines public safety? Have you felt safer with each jail that has been constructed in California?

The trajectory of covert racism since the gains of the civil rights movement has allowed the white majority to submit to a brand of dog whistle politics that is responsible for gutting our social safety net programs, and increased our investment in the war on drugs…we tacitly accept a public health issue turned into a criminal justice issue…we tacitly accept criminalizing poverty and creating a culture where Black and Brown bodies are pathologized, demonized, and dehumanized. I think it’s important to note that we are only now seeing a shift in public opinion on harsh drug laws, not coincidentally, has this shift only occurred with the ongoing opioid crisis that has largely impacted white communities across the country.

It is with this in mind, that we, as white people of conscience, must force a change of course, and move away from normalizing the investment in jails and divestment in communities. We must put an end to racist policies and coded language that is used to justify locking people in cages instead of providing the social support needed for people who are struggling to survive. It is up to us to say we will not stand idly by and allow billions of our tax dollars to go toward incarceration, only to lock people out of society upon release, effectively being destined to second class citizenship thereafter.

We, as white people, must create the consciousness shift in millions of fellow white people in Los Angeles and across America — to say that we will no longer collude with the fragmentation that this white supremacist system has created. We will all benefit when our solidarity is strong, when we interrupt those who sow divisions based on race, class, gender, gender identity, sexual orientation, and ability. When we recognize that our liberation is bound together…that the weight of oppressive systems will only be broken when we act. When we act together. It is time to bring an end to jail expansion in Los Angeles county and beyond. To all who care about justice, this is your issue. We must lay the groundwork to defeat all manifestations of racism in this country, with the expansion of the prison industrial complex being an egregious example of that which must be stopped.

As white people, we must demand that our county and our country do better than this. It is time that we reevaluate our priorities and our values that allow white people to feel an investment in jails is worthy over an investment in life. Let us together reimagine what a world free of cages could look like. If you had $3.5 Billion to solve pressing issues in Los Angeles County, how would you use it?

Dahlia Ferlito is a co-founder of White People 4 Black Lives (WP4BL), a white anti-racist collective and activist project of the Alliance of White Anti-Racists Everywhere (AWARE-LA); WP4BL operates within a national network of white anti-racists called Showing Up for Racial Justice (SURJ) and is rooted in acting in solidarity with Black Lives Matter: Los Angeles.