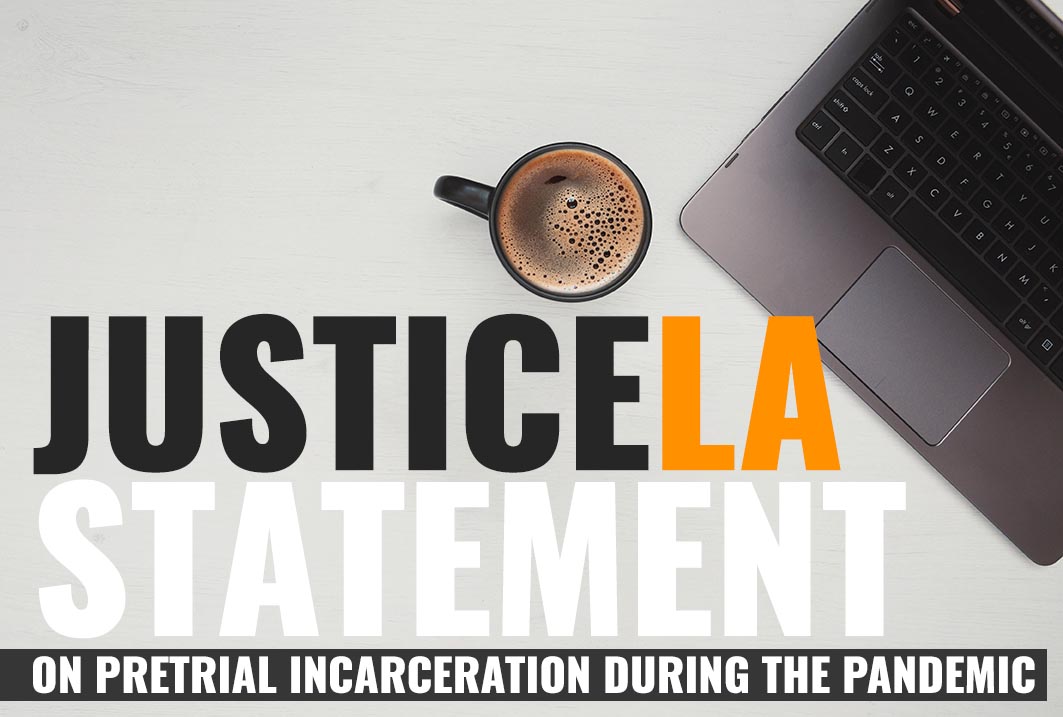 Justice LA Coalition members, and the Coalition as a whole, have spoken loud and clear since the inception of COVID-19 about the necessity of releasing people from carceral facilities in the County of Los Angeles due to the heightened risk of infection and death presented by COVID-19 for incarcerated people. As Justice LA and many public health and social justice leaders have cited since the beginning of the pandemic, people incarcerated in jails have no ability to socially distance due to the confined conditions people are held in.

In the months since the COVID-19 pandemic began to rage, Justice LA and its members have continued to fight for comprehensive pretrial reform at the California state level, as well as at the county level. This work has meant blocking racist, classist risk assessments that lead to increased pretrial incarceration, and instead, advocating for comprehensive pretrial reform that would ensure the presumption of innocence.

In addition, Justice LA invested fully in the Measure J effort at the LA County level, winning the campaign to direct at minimum 10% of the County’s unrestricted funds out of law enforcement and into alternatives to incarceration and systems of coordinated care. The dollars that we won to be re-allocated must be used to fund community-based services, including funding comprehensive County-wide pretrial services that are housed outside of the Los Angeles County Probation Department.

With the inauguration of newly-minted Los Angeles County District Attorney George Gascón,  Justice LA released a statement encouraging Gascón to advocate for comprehensive pretrial reform that would lead to releasing as many people incarcerated pretrial as possible. Instead of pretrial incarceration, we advocate for providing our people with support for behavioral health needs, support in their cases, and access to services that are not tied to Probation.

As COVID-19 surges across the County, with +13,652 news cases being reported countywide just yesterday, and ICU beds at 0% capacity, Justice LA again reiterates our demand to release people who are being held pretrial in the County of Los Angeles. There are no medical resources available to treat people impacted by this deadly wave of COVID: the need to safely release people is urgent. In the jails, the situation is even more dire. The UCLA Law COVID Behind Bars data project reflects a rapid upswing over the last month in the number of people infected with COVID-19 while incarcerated. 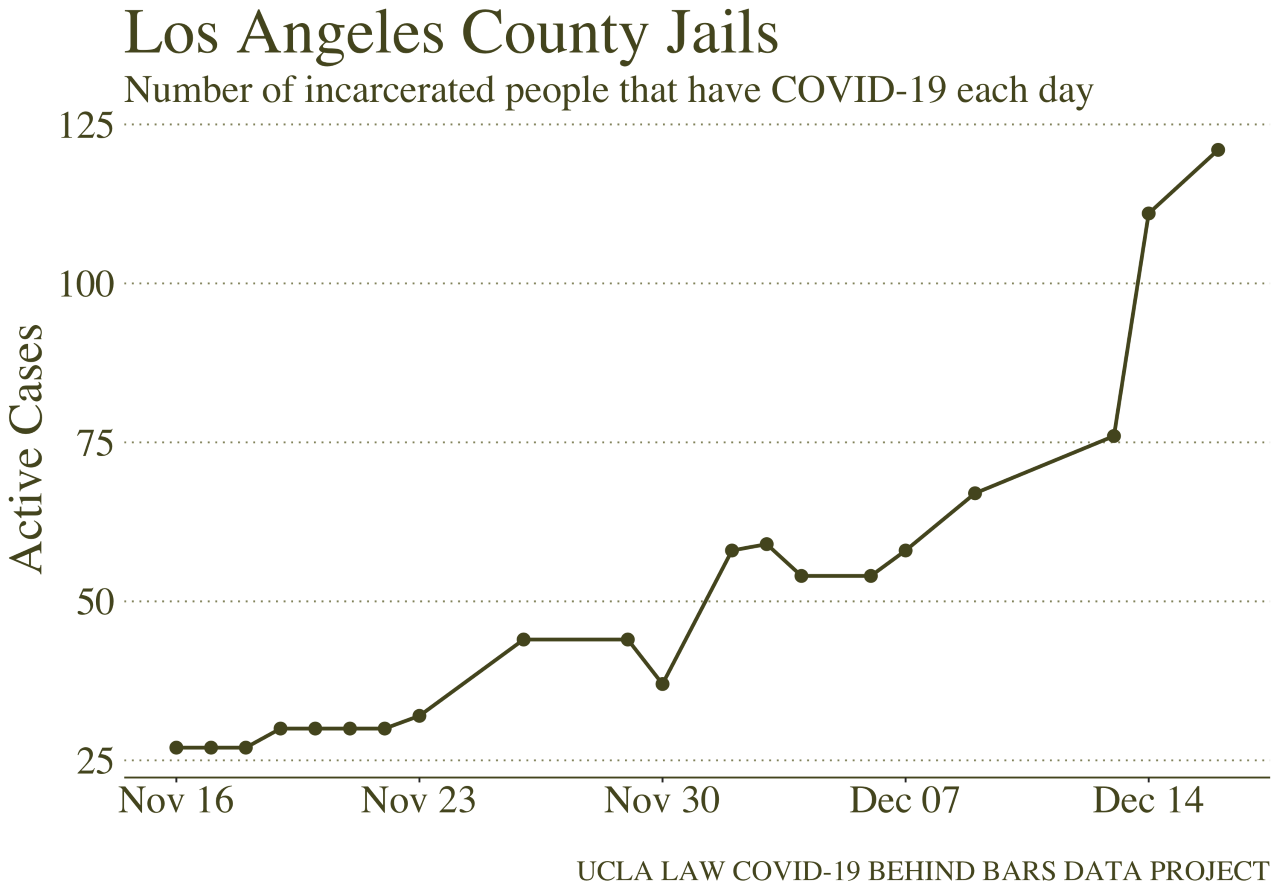 Underscoring the importance of releasing as many people as possible to preserve human rights and community safety, the UCLA School of Law’s Bail Practicum has just penned a new report, titled “Counting the Days: The Story of Prolonged Detention During COVID-19.”

The UCLA report states, “Hundreds, if not thousands of people, considered legally innocent, find their access to the courts and counsel, two of the most important rights in our criminal legal system, cut off. People are missing court hearings and experiencing lengthy trial delays, all while being exposed for increasingly longer periods of time in the jails, considered some of the deadliest congregate living settings in the country.”

In a press release accompanying the report, UCLA’s Bail Practicum shared critical data about these jumps in the length of pretrial incarceration, saying: “People incarcerated in Los Angeles County jails pretrial are being held for longer periods of time during the COVID-19 pandemic than prior to the pandemic. While 35% of the pretrial population in January had been in custody for six months or longer, in September it jumped to 41%.” This report data shows us that, rather than decarcerating, as public health experts call us to do during the pandemic, the County is holding people longer pretrial, thus violating their right to a speedy trial, and harming community safety by furthering conditions that increase the spread of COVID.

Even though the County is aware of the grave risk people incarcerated in the jails face during COVID-19, many County actors have exacerbated this crisis rather than take every action to protect people who they have a duty to serve. Litigation that was filed in April against the County by Justice LA member organizations like Dignity and Power Now and Youth Justice Coalition, as well as by Black Lives Matter co-founder Patrisse Cullors, has not led to any decrease in the jail population; in fact, the LA County Sheriff’s Department continues to book increasingly more people into custody during this dangerous time. Recently, a judge ordered San Quentin to be depopulated by 50%.

Similarly, in a powerful litigation victory led by ACLU of Southern California, a judge ordered a 50% depopulation of Orange County as well. These judgments were based on public health experts’ opinions. Experts know that without these reductions in jail populations, community members’ lives are at risk. Lex Steppling, Director of Campaigns and Policy at Dignity and Power Now, remarks of the situation: “LA County cannot continue to let people die and risk more and more lives in service of political inertia.”

Los Angeles County can take action now, without a judge’s order, to reduce the jail population. The County managed to reduce jail populations by over five thousand people at the beginning of the pandemic, and they must do it once again.

Alicia Virani, professor in the Bail Practicum at the UCLA School of Law, says, “What is most imperative at this moment in time, amidst the surge in COVID-19 rates, is that people are safely released into the community, are tested prior to being released to prevent community spread, and that in-custody trials are prioritized and safely carried out.”

We must follow the advice of public health experts and community leaders to ensure the safety of our incarcerated loved ones by moving to safely release people being held pretrial.

Sign up for Justice LA’s e-blasts to take action with us, here.