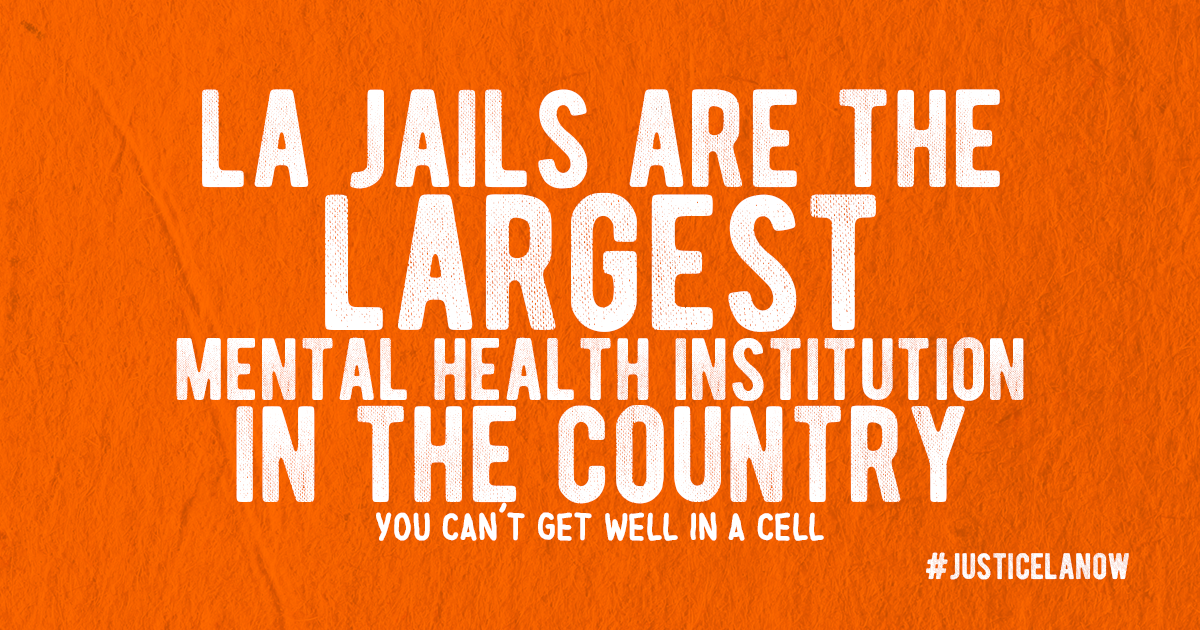 By laying a path for releasing thousands of prisoners with mental health concerns, the Office of Diversion and Reentry has now released a bold vision for decarceration and mental health treatment that echoes what communities opposed to jail construction dared to imagine over a decade ago.

“Care not cages” has been the rallying cry of community lead opposition to jail expansion in Los Angeles for nearly a decade. JusticeLA, a coalition of advocates, community members, individuals and families impacted by incarceration, continues building on the legacy of resistance by groups like the Coalition to End Sheriff Violence and L.A. No More Jails, calling for an end to jail construction and an investment in community-based treatment and support. Through our collective work, we have not only stopped the jail expansion plan for LA County, but we have shifted the entire paradigm away from a reliance on jails to a focus on health and human services. In fact, the creation of the county’s Office of Diversion and Reentry was a direct response to community pressure for increased diversion back in 2015. What began as a pilot program has proven to be an effective model for community-based treatment and diversion of some of the most serious cases facing the county.

It is clear that the advocacy of the last decade has shifted the landscape of LA County away from incarceration and towards treatment and care.

To their credit, the Los Angeles Board of Supervisors have flexed their collective muscle to ensure that the mistakes of the past are not repeated and that Los Angeles becomes the model for holistic, restorative criminal justice reform. The impact of community advocacy was unmistakable on the critical February 12th, 2019 vote on the jail plan, when Supervisor Mark Ridley-Thomas declared that he supported “Care Not Cages.”

It is monumental that after seven years since the new jail construction plan was proposed, the county is now discussing how a mental health system should replace the jail plan, rather than whether or not we need new jails. Recent motions to study mental health treatment and pretrial reform, as well as the creation of the Alternatives to Incarceration Workgroup, are great first steps in this collective reimagining of LA County. But in order for that vision to be fully executed, the County must commit to fully funding ODR’s plan and implement a transparent process that engages community at every step and invests in the development of local, community-based mental health centers rather than a monolithic hospital that essentially functions as a jail. The ODR report argues that large scale decarceration is not only possible, it is ethically necessary.

JusticeLA continues to demand a fundamental shift away from a centralized mental health facility that resembles a jail.

The construction of a 3,800 bed mental health center, which would mirror the dark legacy of failed and oppressive model of big mental asylums in this country, is not only obscene in size and cost, it is diametrically opposed to LA residents’ needs and national standards of treatment. ODR’s report calls for the diversion of nearly 3,000 people with mental health needs, rendering arguments for the massive asylum obsolete. If built, it will cost up to $2 billion dollars from LA County’s general fund – money that can and should be invested in developing community based services. The proposed asylum is intended to be built downtown, limiting job creation and expansion of community based services to other parts of Los Angeles County in desperate need of resources.

Despite all signs pointing to a complete rejection of the current plan to build a massive asylum and investment in community-based treatment, the CEO’s office and the Los Angeles Sheriff’s Department continue to push for this controversial, flawed, and costly system. Both parties have a vested interest in maintaining the status quo at the expense of Black, Brown and poor communities already suffering from generations of divestment and criminalization. The moment for incremental reforms has passed. What LA County needs now is bold, decisive action.

The community has been calling for paradigm shift away from incarceration towards real public safety that prioritizes well-being and dignity. What ODR’s work demonstrates is that public health strategies are more effective drivers of public safety than arrest and jailing. We will continue to work with elected officials to ensure they do their part in supporting this historic shift away from arresting people, including those who presumably “must” be kept in jail. County leaders’ mandate should be to follow the call of community members, the research of ODR, and various health and justice leaders who agree that diversion, not jail, is the most effective public health strategy. The county now has the opportunity to build on ODR’s assessment and consider diversion opportunities for other subpopulations, such as the county’s pretrial population which hovers around 44% of the total jail population, prevention before these individuals are arrested and how these models will be staffed.

By stopping new jail construction, we have already moved mountains. With your continued support, we can make our dreams for a strong and healthy LA a reality.