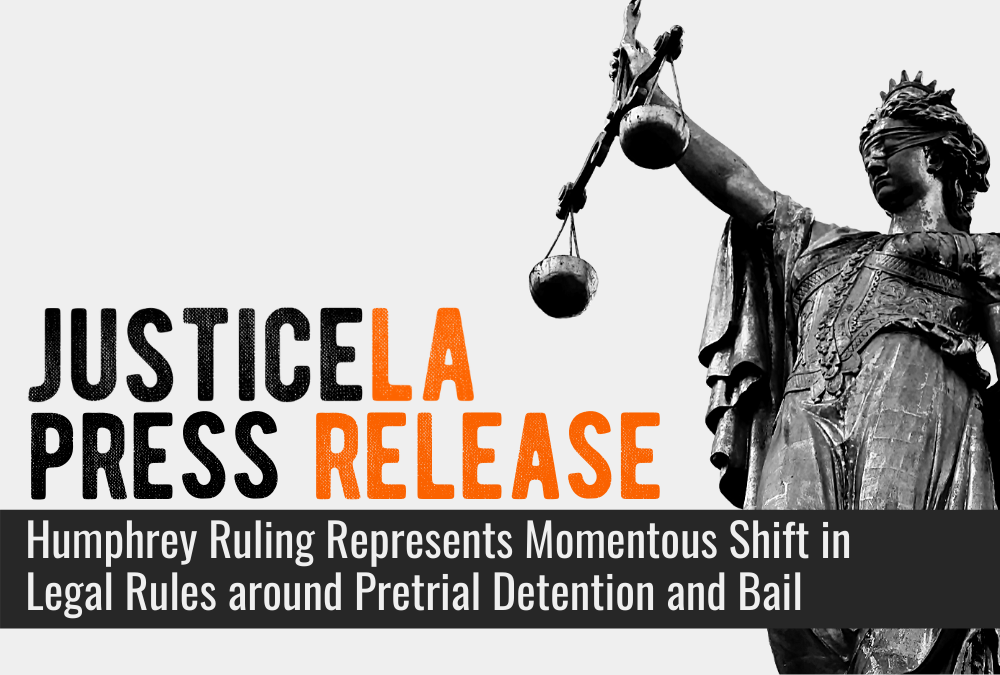 Now, we need legislative changes that honor the presumption of innocence by limiting judges’ ability to incarcerate people pretrial.

Los Angeles, CA – March 26, 2021 – In the case In re Humphrey, the California Supreme Court found yesterday that judges in the state violate the US Constitution by setting unaffordable bail amounts that keep people in pretrial custody on mere accusations. In a unanimous vote, they ordered judges to release people with non-financial conditions if possible and to only set bail in affordable amounts after determining a person’s ability to pay. This ruling represents a momentous shift in the legal rules around pretrial detention and bail.

The Court acknowledged many well-documented harms of pretrial detention: it punishes people presumed to be innocent without them having been convicted; it costs taxpayers greatly; it causes people to lose jobs, homes, healthcare, connection to family. Strangely absent from the Court’s list of harms was that pretrial detention coerces people to plead guilty regardless of actual guilt because prosecutors and judges offer freedom in exchange for guilty pleas.

While the Court ordered changes to how money bail can be set, they did not address the bigger question of when judges may simply detain people without setting bail. They said that a judge may detain a person pretrial without setting bail if the judge finds that person is a risk to “public safety” or a risk of fleeing to avoid prosecution, but they did not say whether that power applied to all accused people or just those accused of certain crimes.

Judges, who have traditionally used money bail to hold people in custody pretrial, have argued that they can simply order anyone detained without even setting bail. The Humphrey decision avoided setting limits on who judges can “preventively detain,” deferring that decision for another day. Similarly, the Humphrey decision did not detail what procedures are required for a judge to decide whether to detain someone, leaving an accused person’s right to due process in doubt.

Given how judges have used pretrial detention through money bail as a tool to efficiently coerce guilty pleas, the Humphrey decision leaves us concerned that judges will simply adjust by ordering preventive detention instead.

The decision underscores the need for legislative changes that honor and preserve the presumption of innocence by limiting judges’ ability to incarcerate people pretrial. Legislation should set up legal standards and procedures that guarantee due process and fair hearings. It should prevent judges from imposing burdensome release conditions, like electronic monitoring and drug testing, that set people up for re-incarceration. It should establish pretrial services agencies, independent of law enforcement, that help people get to court while ensuring safety for all people involved. JusticeLA and the Care First California coalition will soon be releasing a legislative proposal that does these things.

Meanwhile, Sen. Hertzberg’s bill, SB 262, which sets $0 bail for most offenses at arrest and booking, is a start to fixing some of the reform needs highlighted by the Humphrey decision, particularly if that bill is amended to, among other things, better define the ability to pay determination and to limit judges’ ability to subsequently detain people.

The California Supreme Court has made a powerful statement, condemning the use of money bail to detain poor people pretrial as an unconstitutional use of power. However, they have left open too many ways for judges to continue to treat people unfairly and use pretrial detention against them. We must take the next steps and legislate limits that make the criminal legal system fairer and that honor and preserve the presumption of innocence.