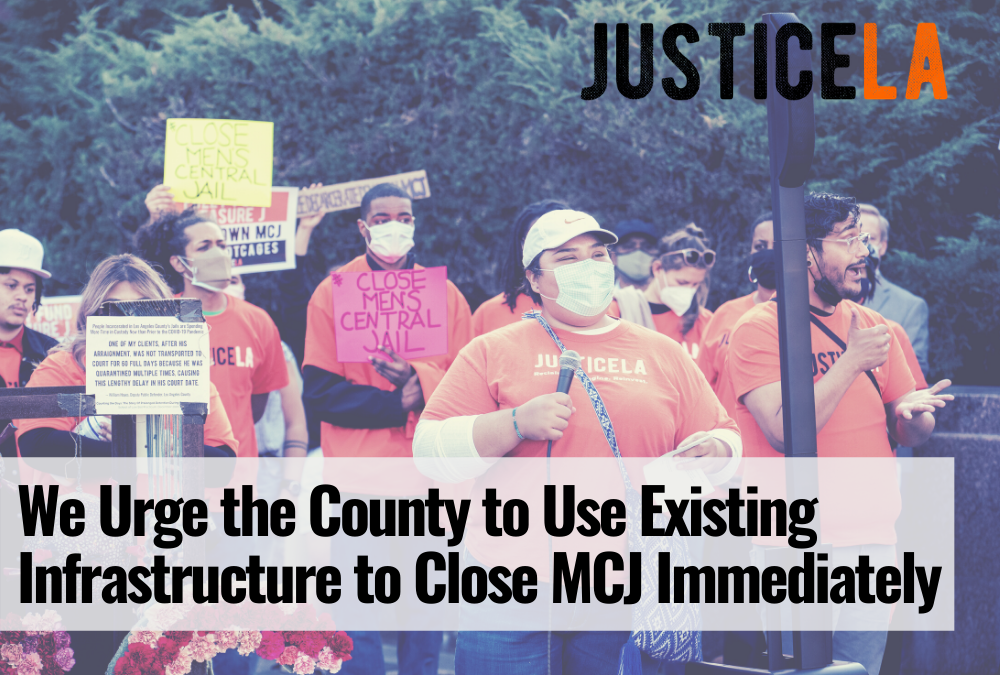 Get the PDF statement here

The Justice LA coalition has championed and amplified the longstanding demand for the closure of Men’s Central Jail for years, and is fully committed to supporting the development of critical steps towards closing this deadly and expensive jail once and for all. Members of our coalition, volunteers, and community have given literally thousands of hours to the County in an effort to move towards a Care First reality. Through these partnerships, collaboration, and public access we have jointly created: 1) the Care First, Jails Last ATI Report, 2) Men’s Central Jail Closure Report, and 3) the Measure J year one spending plan. The process to develop those reports and recommendations was not easy, but these reports and recommendations speak for themselves. The county was right to support and facilitate a process that became a model for civic democracy and led to policy outcomes that became the envy of the country. These collaborations and partnerships have been transformative, and the results of our collective, transformational and collaborative work put the national spotlight on LA County for the right reasons. We shared with the County a thorough roadmap towards finally ending its horrific and shameful reliance on punishment and jails.

Now, we are frustrated to see the County continue to put process over outcomes. The only way to close a jail is to close it. Other jurisdictions have done this with far less resources and far less public support. MCJ should have been closed and demolished years ago, and yet, this motion sets no clear timeline for such a closure. The Men’s Central Jail Closure Report includes pathways and a 18-24 month timeline for how to reduce the jail population while increasing capacity for community-based services in order to close down MCJ and other jails. We are concerned that this new implementation process would cause additional delays and bureaucratic hurdles, when the Board has the power to direct the CEO to close MCJ now. The multitude of reports that the County has used to slow the process, including the Health Management Associates Report from six years ago, and the pending Jim Austin Report, are blockades to progress that have and continue to slow the vital process of releasing our loved ones from this life-threatening carceral facility. The slowing of jail closure due to bureaucracy and the prolonging of this process is painfully similar to prior efforts that not only failed to close MCJ, but that also eventually brought about plans to expand the jail system. Prior echoes of what is currently taking place brought about the necessity for the community to step up, and subsequently birthed JusticeLA. Instead of introducing more layers of bureaucracy to the MCJ Closure process, we must speed up the process with all of the ATI and Measure J Recommendations already in place.

The motion, as approved, cuts out the very drivers that brought us to this point. It is hard to understand the logic, and even harder to imagine that the motion will actually lead to the closure of MCJ in the timeline recommended in the MCJ Closure Report. We are concerned that the Jail Closure Implementation Team (JCIT) has no embedded community voices or accountability mechanisms despite the mandate to receive input from the community. It is imperative that community members who have been directly impacted by incarceration and criminalization are specifically included in this next phase of closure. Groups of directly impacted people already exist within the County’s infrastructure, and should be fully resourced. For example, the LA County Reentry Health Advisory Collaborative (RHAC) is composed of people directly impacted by incarceration, and its members can be helpful to the JCIT as they informed the Men’s Central Jail Closure work. If this process is to be successful the community needs to be at the table, and not an afterthought.

We believe that the Men’s Central Jail closure process should not be centered around a strategy of attrition. No jail has ever been closed that way. Strategies of attrition place the most vulnerable in an even more unsafe holding pattern, as subjects for policy experimentation rather than as human beings who continue to be at risk for harm and death in an institution with two decades of data showing its harms. The mandate to close jails should not be dependent on whether a Sheriff’s department decides to change its arrest priorities or whether the department of Probation prioritizes technical violations, for example. It also should not be dependent on the courts and judges, who are not accountable to anyone but themselves. The Sheriff’s recent statement that houseless people are an “existential threat,” and his threats of mass arrest of the houseless population in Venice, despite the overwhelming evidence that LASD intervention has been harmful, grossly contradict the County’s ‘Care First, Jail Last’ plan. His behavior demonstrates that the LA County jail population is subject to the political agendas of various departments’ leadership.

The County must maintain diligence in funding the Men’s Central Jail Closure Plan and Measure J Year 1 Spending Recommendations. Black and Brown people make up most of the people in the LA County jail system. The County must thus invest in life-affirming interventions that reduce police contact and arrests of Black and Brown people, as well as scale up diversion efforts. Funding these priorities ensures that the historic steps taken towards jail closure will build lasting momentum towards a care first Los Angeles.

Our coalition is disappointed by the decision to create another process to figure out how to close MCJ. Today’s motion doesn’t bring us any closer to closing MCJ than we were 6 months ago. We know this Board has committed to closing down Men’s Central Jail; at this stage we need more than words, and frankly, a better plan. We need to see the Board make a commitment to continue to work with the community in a way that has already been proven effective. The Board must set a clear and rapid timeline to close down Men’s Central Jail with the continued involvement of community voices, and without creating more bureaucracy.

This statement is in response to the following Board Motion: 27. Jails Last: Creation of the Jail Closure Implementation Team