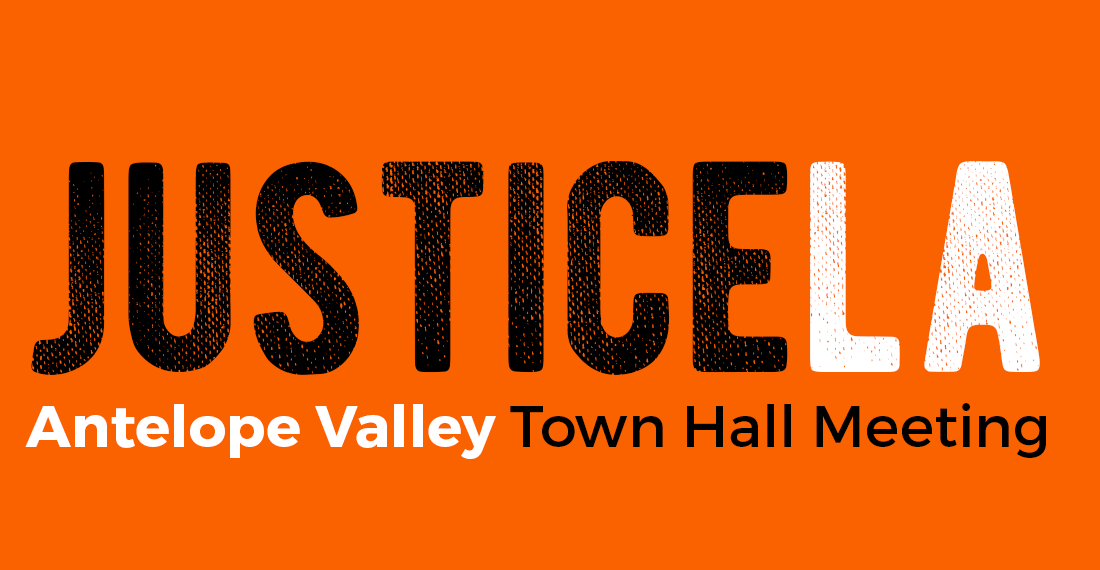 Los Angeles, CA – After the announcement of yet a third death in an L.A. jail within the span of a month, JusticeLA, a coalition of organizations challenging the Los Angeles County Board of Supervisors on their plans to spend $3.5 billion on two new jails, will hold a town hall meeting on Monday, October 23 in Antelope Valley to discuss their campaign to call on the County to redirect funds intended for new jails to community services and other alternatives to incarceration. The meeting follows JusticeLA’s campaign kickoff against the county’s jail expansion plan that saw 100 jail beds placed in front of the Kenneth Hahn Hall of Administration in downtown Los Angeles.  The town hall meeting will be held on Monday, October 23 at 5:30 p.m. at the Center for Spiritual Living in Lancaster (1030 W. Avenue L8).

“With all of the thousands of deputies and officers working in our jails with the sole job of watching inmates–while at the same time costing the citizens of Los Angeles County tens of millions of dollars each year–there’s absolutely no excuse for people to be dying in our county and city jails,” said JusticeLA co-founder Patrisse Cullors.  “More than half of the people in our jails are only there because they haven’t stood trial and cannot afford to pay the high bail.  The Board of Supervisors wants to take $3.5 billion and sink it into the same failed jail system instead of considering alternatives to incarceration.  That’s just ridiculous. There’s an old saying that goes ‘if it ain’t broke don’t fix it.’  Well it’s broke and we want to fix it.”

The third death was announced Monday by the Los Angeles County Department of Medical Examiner-Coroner as being a 50-year-old man who was found unresponsive in his cell and died at the Los Angeles Police Department’s Metropolitan Detention Center over the weekend. Nineteens days earlier, two inmate deaths were reported two days apart at L.A. County Men’s Central Jail in downtown Los Angeles.

In 2015, the Board of Supervisors approved a settlement with federal officials over allegations that sheriff’s officials systematically harassed minority residents in the Antelope Valley and targeted African Americans living in subsidized housing.  In 2013, the Department of Justice (DOJ)  found that the Sheriff’s Department’s Lancaster and Palmdale stations, both of which are located in the Antelope Valley, engaged in a pattern or practice of stops, searches, and seizures and excessive force in violation of the Constitution and federal law.  In addition, the DOJ found a pattern of discrimination against African Americans in its enforcement of the Housing Choice Voucher Program in violation of the Fair Housing Act.  The settlement requires the Sheriff’s Department to comply with a series of rules on training, use of force and community engagement, and to be subjected to independent monitoring of its progress.

Long time Antelope Valley resident and former vice-chair of the Antelope Valley branch of the NAACP Waunette Cullors added, “The Antelope Valley is oftentimes forgotten by the Board of Supervisors and the Fifth District is underserved on so many levels.  African-Americans and people of color are the ones who suffer the most when we don’t invest in our communities. This town hall meeting is a chance to engage Antelope Valley residents in the possibility of reclaiming, reimagining and reinvesting in our youth and families in hopes of creating a future where we don’t need to spend billions of dollars on incarceration. As a community we should decide how to best utilize funds to better serve our community’s needs.”

JusticeLA will be holding town hall meetings around the County’s planned jail expansion in each of the five supervisorial districts.